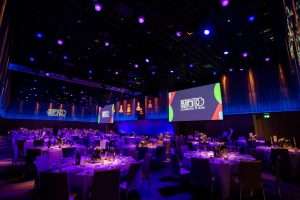 After a long wait to return to a full-scale awards ceremony, the BFDG Awards were able to go ahead this year to celebrate the incredible talent of the film industry’s art departments. The Londoner Hotel in Leicester Square was host to the 2021 awards, which were postponed due to Covid restrictions last year. Film creatives were full of anticipation for the return of the prestigious awards and to finally have their hard work during the pandemic being recognised.

NR Events took on the production of this event, from liaising with the technical suppliers to produce an eye-catching stage setup to sourcing the costumes for the West End dancers. Over 300 audience members enjoyed a three-course meal alongside professional entertainment before the awards ceremony began in the late evening. 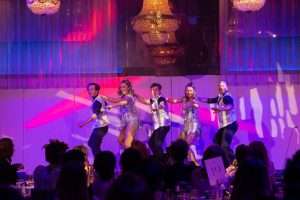 We worked closely with Chair of the British Film Designers Guild, Sonja Klaus, to bring her creative vision for the event to life. Working as the Production Designer on many prestigious films and series, including Terminator and Mr Selfridge, it was vital that we were able to produce a show that reflected the tasteful eye of reputable film creatives. The event included many intricate details, down to the napkin rings and name cards that decorated each table. 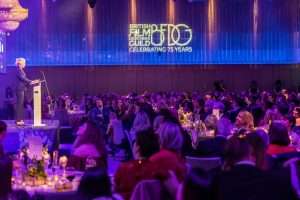 After working on a fantastic virtual ceremony for the Guild in 2021, I was delighted to be asked to produce this year’s in-person event.

Working alongside creatives from the world of film brings an extra level of scrutiny to the event design but with a clear vision from chairperson Sonja Klaus and the fantastic backdrop of the Londoner we were able to deliver a high quality finish.

Staff at the Londoner commented that they had never had an event without a stage backdrop but we boldly didn’t add anything, we did not want to add anything that might feel corporate and with the chainmail and luxurious wall coverings, our simple stage set of chandeliers worked well.

We were lucky also to have sponsors who supported the design vision with floral centerpieces (palmbrokers) and we could just enhance their table design with scatter crystals.

Entertainment came through a personal contact of the chair person but we were treated to a spectacular performance by some west end performers to open the show, who came out following a short skit performed in the style of the 2021 awards by Sonja.

BFDG awards was a beautiful event, in a stunning venue (The Londoner), the décor showed the theme clearly with a diamante table and large glamorous chandeliers. The event ran smoothly with only small obstacles, everyone from the BFDG team, technical team and event team worked amazingly together to be able to create a very special night. 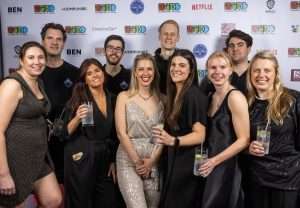 First time working at a festival and no idea what to bring/wear/do? We've got you covered with our top tips:

1. Always bring your own loo roll. ALWAYS
2. Pack lots of comfy clothes for your shifts. No one wants to feel uncomfortable when things get busy. That sparkly two-piece can wait for the evening 💃
3. EXPLORE! Even if you're by yourself, a festival always has so much you can see and do at any time of day or night.
4. Make friends. Chances are you'll see them again at another festival 🎪
5. Invest in quality camping gear if you can. The initial blow to the bank account will be worth it in the long run!

Two weeks of build, live, and break created a lot of memories to look back on so here are a few snaps from behind the scenes! 😎

Click here to see our latest blog about how Site Management was at the Bath Royal Crescent: https://wearenrevents.com/news/

This summer, we took on Site Management at the Royal Crescent in Bath which hosted @michaelbuble for two nights to a sold out crowd. @aeg_presents took various global artists on a tour of the UK to the most picturesque settings we have to offer. 🌳

14,000 people filled the park along with many more locals lining the perimeter of the site to listen in to the incredible show! Credit to Ewa Korda for this breath-taking view of what NR Events managed to deliver alongside Senbla, LarMac Live, and Site & Stage. 🔨

"During June and July, Cheltenham's Brewery Quarter became host to a popular Wimbledon screening that aired all of the top games of the tennis tournament to the local public as they went about their day in the bustling town centre. 🎾

Big thanks to @productionav for this great set up and, as always, brilliant to work alongside the Cheltenham BID to bring this entertainment space to life. 📺

Check out our latest blog post about local events we have been part of recently in Cheltenham ""The Festival Town"": https://wearenrevents.com/news/

The Queen's Baton Relay visited Cheltenham on 5th July on its 294-day journey through 72 nations across the world. The Baton travelled through the south coast and south west before reaching Cheltenham on the second day of its UK tour. 🏅

The 6 local baton-bearers were nominated by friends and family for their contribution to their community and it was a pleasure to help deliver this event alongside @visitcheltenham, @cheltbid , and The Cheltenham Trust to celebrate the opening of the Birmingham Commonwealth Games 2022. 🏃

After the excitement of the Lionesses winning the Women's Euros last night, it's only right we share how we've been a part of some events championing the next generation of female footballers! 🦁

Across May and June, we helped the team at 1851 Trust to deliver their STEM Football Festival events to schools around the country to help promote #ChangeTheGame and the perception around women's football. ⚽

As an all-female team here at NR Events, we understand how important it is to encourage other young women to chase a career in the industry they love even though it may seem to be dominated by men! It was great to bring fun-filled activities to the next generation of people in STEM. 🦾

A new blog post is up about our time working on the Evictions team at Glastonbury 2022. Check it out to see what we got up to 🙌

Have you ever seen a better Glastonbury lineup? 🤩

After a long 3 year wait, the evictions team ensured that everyone at the festival had a safe and enjoyable experience. Thank you to the team for their hard work across the weekend 💪

We were lucky enough to head to Glastonbury this year for the festival’s 50th anniversary! 🥳

Want to hear more about our production journey with Cheltenham Festivals? Head to our website and check out the ‘News’ section with a brand new blog post about the Science Festival!

Months of planning, preparation, and zoom meetings later, we finally opened the doors to the Cheltenham Science Festival. As you can see from the second photo - we were pretty chuffed with ourselves 🤩

This year, we took on the production for the Cheltenham Science Festival which ran from 7th - 12th June. 🎪

Visited by thousands across the six days, it was fantastic to see the unique experiences that we helped deliver to all age ranges!

A HUGE thank you goes out to the team at @cheltfestivals for having us on board and all of the suppliers who created a very special festival.

Can you believe its been 3 weeks...

The British Film Designers Guild Awards were hosted by @kermodeonfilm who as ever was fantastic.
We also supported with content for winners clips alongside Compuhire.
We also had support from @universalpixelsvideo
And @specialtreatsproductions
Completing our on the day production team was @grace_gadd and @abarrigav working for our wonderful long time collaborator @bimlajackson

Thank you @british_film_designers_guild for the opportunity 😆

📸 – photos by the ever wonderful @blackedgeproductions

We love working on awards! 🌟

If you're holding an awards ceremony, get in touch!💎

We were delighted to take on the production for the @british_film_designers_guild . We created a sparkling table design to celebrate the 75th anniversary (diamond anniversary) of the Guild - using diamante napkin rings, alongside candle sticks from @veeverscarter and stunning floral centre pieces by @palmbrokers .

The main ceremony was in the fantastic ballroom space @thelondoner where we created a stunning stage set with vision from Sonja Klaus, chair of the guild, simply hanging crystal chandeliers to reflect the 'diamond' theme 💎 At certain points in the event the diamond effect went further with two fabulous mirror balls.

One of our favourite events of the summer! @wanderlustgb ...

PLANNING YOUR NEXT EVENT?

Get the latest Updates