We are privileged to be involved in many of the local events that take place in our hometown of Cheltenham. Working with Cheltenham Borough Council, Marketing Cheltenham, Cheltenham BID, and The Cheltenham Trust, recent events have celebrated sport in the UK and competitions that receive worldwide coverage. Over the last couple of months we have helped deliver the Queen’s Baton Relay through Cheltenham and a large screening of Wimbledon in the local entertainment complex, The Brewery Quarter. 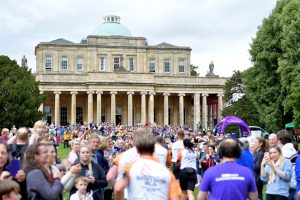 The Queen’s Baton Relay visited all 72 nations across a 294-day journey which landed in Cheltenham on the evening of the 5th July 2022. The baton passed through the south coast and south west before reaching Cheltenham on the second day of the tour, which was greeted by a crowd of residents cheering on the local baton-bearers. The baton-bearers were nominated by friends and family for their contribution to the community giving the town 6 representatives for the short run from the Prince of Wales Stadium to the Pittvill

The afternoon consisted of live music entertainment from a DJ as well as a pianist, BBQ food was on offer to the public and a children’s play area whilst the atmosphere built before the relay commenced. NR Events’ role in this was to liaise with each venue as well as the Commonwealth Games tour team about the most suitable route to take and how the crowd would be managed. We also sourced the audio equipment and assisted in the setup and management of the VIP area which included guests such as the Cheltenham Town Mayor and local respected business owners. 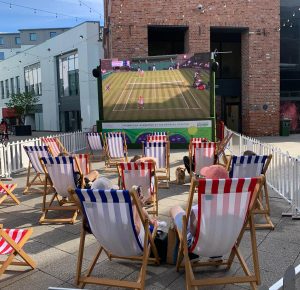 Wimbledon is one of the most infamous sporting events in British history and so, to celebrate this, Cheltenham Borough Council set up plans to host a large screening of the tournament in the town’s favourite entertainment complex, The Brewery Quarter. We worked alongside Production AV to build an astro-turfed screen with an area for 20 spectators in comfy deckchairs to be able to relax in the sunshine and enjoy some tennis.

The restaurants and bars in the Brewery Quarter offered food and drink to the Wimbledon audience for them to enjoy in the comfort of their deckchairs. On the weekend of the finals, Cosy Club featured a pop-up bar next to the screen offering chilled alcoholic refreshments.

We had a great team of freelance event managers who kept the screen running smoothly on a daily basis, reacting to any weather changes, answering any public queries, and keeping on top of the busy live Wimbledon schedule on various BBC channels. The event received plenty of positive feedback and many thought it was a great addition to an already bustling area of the town.

Working with @cheltbid and @visitcheltenham, Christmas in Cheltenham launched with fantastic performances around town from @bakehousefactory and local Cheltenham choirs 🎭

'Christmas Unboxed' entertained families at 4 different locations around Cheltenham, with unique characters who helped conjure the magic to switch on the Christmas lights 🎁

The Gala Dinner rounded off the first day of conference with a black tie event, awards ceremony, and quality live music entertainment 🎤

Hear about some of the feedback the event received:

✨"The speakers were absolutely first class, the organisation and venue were great - all round incredible experience."
✨"Superb, very well organised, great speakers and should be the benchmark for future conferences."
✨"What a fantastic event! This enabled so many like minded people to come together and share ideas."

Take a look at our latest blog post about the NBPA Conference by following the link in our bio!

The NBPA Conference at Cheltenham Racecourse hosted inspiring keynotes and sparked conversations and debates about how the police can better tackle racism and diversity, both within its workforce and amongst the community.

The exhibitions in the Hall of Fame also acted as a great networking space for delegates and a chance to find out more about organisations such as the College of Policing and the RAF Police.

Over the course of this year, we have had the privilege of producing the National Black Police Association Conference 2022 for this year's host, Gloucestershire Constabulary, @glospolice.

The association is a key agent in tackling issues of racism and diversity within the UK Police Force and building relationships with ethnic minority communities.

A huge thank you to #tivolicheltenham @tivolicinemas for hosting our Welcome Event and providing a stunning setting for an evening of networking, food, and drinks. The screens also offered a chance for thought-provoking short films on racism and diversity in the UK to be showcased to the guests.

Are you interested in finding out more about NR Events and how we came about? Or are you thinking of going freelance/setting up a business and need a bit of insight into how it might be? 🤔

Head to our website to as we sat down with Natasha in our latest blog to find out all things running an events business! 📝

This month we are celebrating the 10th Anniversary of NR Events 🥂

Comment below if we have crossed paths in that time and where! 🎪

Here at NR Events, we've been looking back through the archives of the last 10 years! 🎉

Festivals all have their own unique selling points, from genre to decor to location - but what's the one thing that makes your favourite festival so great?

Let us know in the comments 🎸

First time working at a festival and no idea what to bring/wear/do? We've got you covered with our top tips:

1. Always bring your own loo roll. ALWAYS
2. Pack lots of comfy clothes for your shifts. No one wants to feel uncomfortable when things get busy. That sparkly two-piece can wait for the evening 💃
3. EXPLORE! Even if you're by yourself, a festival always has so much you can see and do at any time of day or night.
4. Make friends. Chances are you'll see them again at another festival 🎪
5. Invest in quality camping gear if you can. The initial blow to the bank account will be worth it in the long run!

Two weeks of build, live, and break created a lot of memories to look back on so here are a few snaps from behind the scenes! 😎

Click here to see our latest blog about how Site Management was at the Bath Royal Crescent: https://wearenrevents.com/news/

This summer, we took on Site Management at the Royal Crescent in Bath which hosted @michaelbuble for two nights to a sold out crowd. @aeg_presents took various global artists on a tour of the UK to the most picturesque settings we have to offer. 🌳

14,000 people filled the park along with many more locals lining the perimeter of the site to listen in to the incredible show! Credit to Ewa Korda for this breath-taking view of what NR Events managed to deliver alongside Senbla, LarMac Live, and Site & Stage. 🔨

"During June and July, Cheltenham's Brewery Quarter became host to a popular Wimbledon screening that aired all of the top games of the tennis tournament to the local public as they went about their day in the bustling town centre. 🎾

Big thanks to @productionav for this great set up and, as always, brilliant to work alongside the Cheltenham BID to bring this entertainment space to life. 📺

Check out our latest blog post about local events we have been part of recently in Cheltenham ""The Festival Town"": https://wearenrevents.com/news/

The Queen's Baton Relay visited Cheltenham on 5th July on its 294-day journey through 72 nations across the world. The Baton travelled through the south coast and south west before reaching Cheltenham on the second day of its UK tour. 🏅

The 6 local baton-bearers were nominated by friends and family for their contribution to their community and it was a pleasure to help deliver this event alongside @visitcheltenham, @cheltbid , and The Cheltenham Trust to celebrate the opening of the Birmingham Commonwealth Games 2022. 🏃

After the excitement of the Lionesses winning the Women's Euros last night, it's only right we share how we've been a part of some events championing the next generation of female footballers! 🦁

Across May and June, we helped the team at 1851 Trust to deliver their STEM Football Festival events to schools around the country to help promote #ChangeTheGame and the perception around women's football. ⚽

As an all-female team here at NR Events, we understand how important it is to encourage other young women to chase a career in the industry they love even though it may seem to be dominated by men! It was great to bring fun-filled activities to the next generation of people in STEM. 🦾

A new blog post is up about our time working on the Evictions team at Glastonbury 2022. Check it out to see what we got up to 🙌

Have you ever seen a better Glastonbury lineup? 🤩

After a long 3 year wait, the evictions team ensured that everyone at the festival had a safe and enjoyable experience. Thank you to the team for their hard work across the weekend 💪

We were lucky enough to head to Glastonbury this year for the festival’s 50th anniversary! 🥳

Want to hear more about our production journey with Cheltenham Festivals? Head to our website and check out the ‘News’ section with a brand new blog post about the Science Festival!

PLANNING YOUR NEXT EVENT?

Get the latest Updates